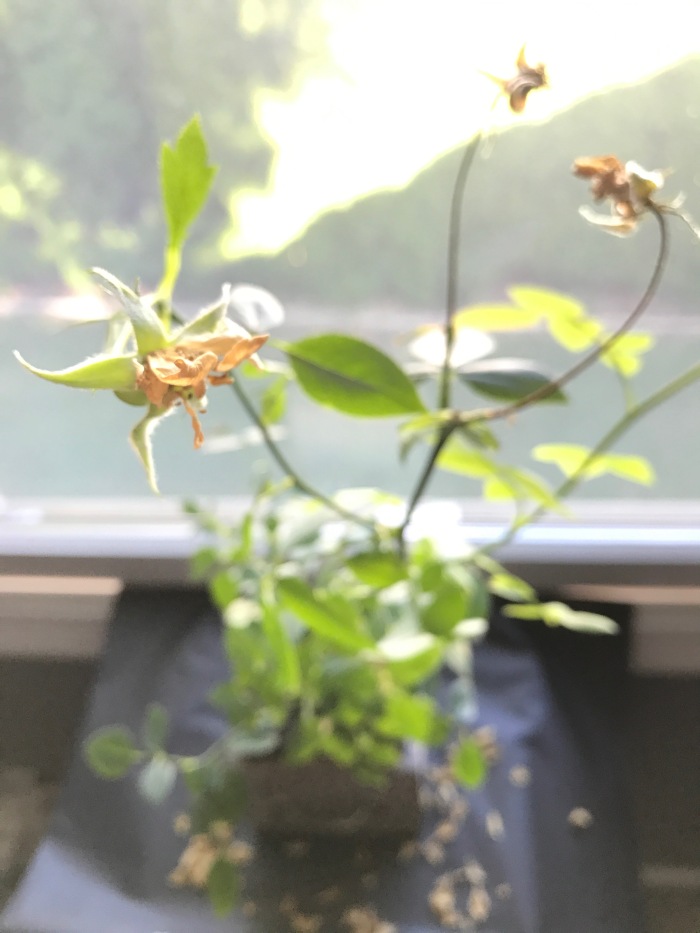 A while back I went with my Mom to a greenhouse as part of her “therapy” when she was having health problems. Flowers have always been her favorite and it’s obvious that the beauty and life of them fills her up when she is surrounded by them.

While she has a green hand, I don’t even have a green thumb. Most things I have tried to take care of that depend on me to survive (as far as plants go, I don’t dare try anything more) die. However, that day I spotted a small rose plant. Not lucuiously red roses, but the small, full white ones. Two of them had bloomed into a magnificent spiral of clean, fresh pedals forming the flower itself.

I had to have it.

I wasn’t sure what drew me in as I never felt the need to buy something I would eventually let die. Something about the simplicity and purity of this plant attracted me. So, I brought it home. Mom took care of it while I was at school for a bit, so naturally when I returned home it looked even better than it had when I first adopted it. Now you know green hand is no overstatement.

For a week, the first thing I did when I woke up was water it. The pedals went from white  to off-white to a soft golden brown. They stiffened and began to fall. One by one they began to reveal the bud that began them. I kept watering, they kept coming back. A continuous cycle, like a snake shedding its old skin.

The dead pedals collected together in a pile around the pot while new white ones bloomed above them with no awareness that they would soon join the others below. The green leaves bursted from each stem up to the top.

One day I took a minute and looked at the plant before leaving for work. They had been brown for days. The only thing changing was the amount of pedals left on each stem. Some had even shrivled up, cripsy and stiff. Frozen in time.

I had neglected to water them for over a week. I forgot. I was uninterested, my priorities did not involve them. I was saddened by the dullness of something that was once so beautiful, so attractive and worthy of attention. I left, assuming there was no hope for it. It was dead and gone.

The next day, something stirred inside of me saying “they’re thirsty”. I looked around wondering what this voice meant. My mind wandered and caught hold of a memory. One that held a picture of fresh, white roses.

I went upstairs, saw the dreary look on the flower’s face and grabbed a glass of water and poured it over the dry, hard, unsatisfied dirt. I thought this was pointless. It was obviously dead; that was one thing I could decifer about plants, I had seen it many times before.

I did this for a week. Nothing happened. Each stem still frozen in time. Once in a while the play button was pushed and a pedal would float to the ground. Nothing more.

Another week went by. I was convinced I was feeding a dead plant. Until one day I noticed a hint of a bud forming on a separate stem. I thought it was just another leaf, something I hadn’t noticed before. Nope. It was a bud. And looking at it now, it still is.   It’s taking its time but it’s in the process of blooming. I forced it two steps back but it’s determined to take two and -a -halfsteps forward until it can catch up.

So, what’s the point of this? I didn’t know until today. I just figured I was learning how to take care of a plant… responsiility or something like that.

I am well aware that there is more meaning behind this plant. This magnificent creature that can bounce back from what I thought was a lost cause. God was giving me a form of his creation to teach me about myself. This is myself as a flower. A metaphor of course.

There was a time when I would let God water me. I would receive His rain. I desired to be filled with His Holy water. I was determined to allow Him to help me grow. I wanted Him to make me pure, innocent, refreshed, renewed. There was a time when I let Him love me, take care of me and I relied on Him to keep me alive.

Recently, I have become the dull, broken, unhealthy, dead flower that rests atop the stems. I refused to be watered, to be taken care of, to be loved. Something inside of me (not from God) says I can get water myself or that I don’t deserve to be quenched of my thirst. I got myself into this dry pit, I have to find the remedy I need by myself too.

Well, God has deliberately shown me how untrue all this is and that it is straight from the enemy. He is showing me that it takes time, but if I openly receive His water it will bring me back to life. It won’t be over night and I will have to be patient (something that I am not good at).

However, this small green bud – A gift from the Creator himself- has given me more hope than I would have ever imagined back in May when it’s roots, stems, and pedals first reached out for me.

He knows how to make me new. I am His white rose.

(God, I pray for whoever reads this that You use these words for their good and for their needs specifically. And that anything I might have said that does not align with Your Word and beliefs that You change it so that it does.) 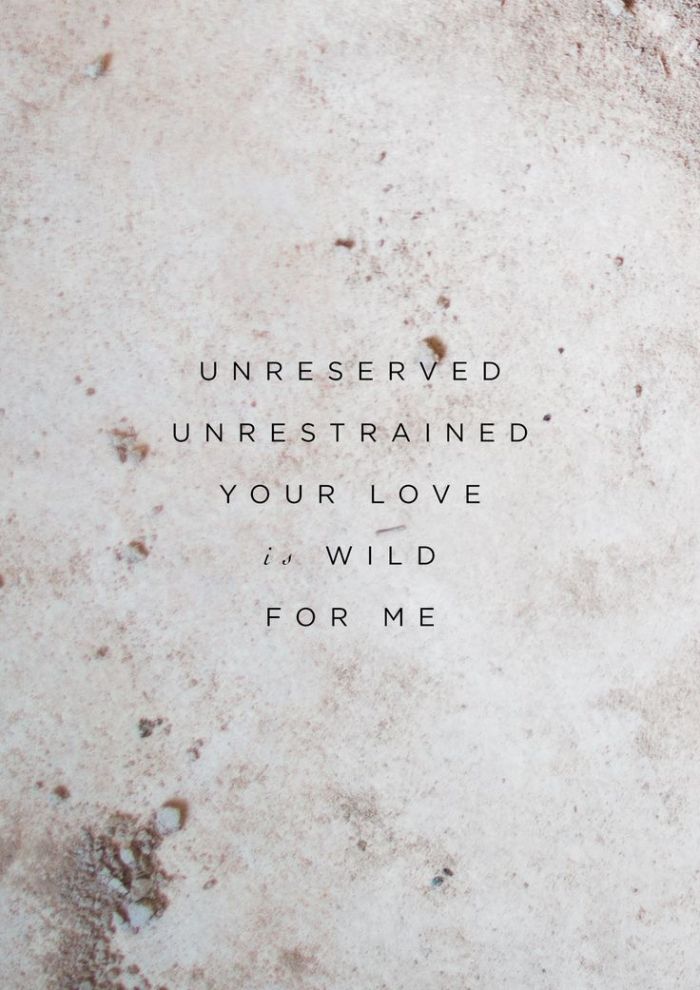 Amanda Cook sings a song called “Pieces”. The main verse is “You don’t give your heart in pieces”. All the lyrics are insanely inspiring, comforting, and help to open up my eyes and get to know God a little better each time I hear them. However, this one line is something that has struck me today.

It makes me melt when I recognize how accurate these words are. He gives his WHOLE heart to each one of us. We, in return, tend to give him little pieces at a time if any at all. And sometimes we even take pieces back, or at least we think we do.

Have you ever seen the picture with the little girl and her teddy bear behind her back? Well, it’s right here if you haven’t.

A picture speaks a thousand words, right? I like to think a good picture just speaks a lot of meaning.

We are so hesitant to let him embrace us and give us everything we need and desire. Yet, we sit here and complain about how little we have, and we cannot even give that up sometimes because we are too doubtful of his love and capabilities.

-What if it gets worse?

-I’m not worthy of that

-I love what I have, I don’t need anything else

We make up a thousand excuses in our minds. If only we could actually see what was behind his back, his plan, the whole blueprint of our life, we would trust him with it. “Oh yeah, that looks good. Okay, let’s go with it” What would be the point of our relationship with him if we did that?

I personally have struggled with this as long as I can remember. I love control and the instant I don’t have it I panic. Any piece of my heart I might have given God before I’ve snatched back. convinced I have the best in mind for myself. I know myself better, I understand what I need.

So, when this happens what does He do? He sits there and continues to give his whole heart. How is this even possible? How does that work? Why would He even want to do that? I question this often. I wonder why He chooses to do this. And then I wonder if there will ever be a time where I can give my whole heart in return.

I really hope so. Because giving it in pieces isn’t doing me any good. All I want is to peek behind his back and see what he has for me. Then I can figure out if it’s worth trading for something else or if it fits into my plan. The one I think I can stick to despite well, life. “Yee of little faith.”(Mathew 8:26) That’s me. I hate to admit it, but I believe it’s the first step. Giving a little piece of my heart because that’s all I can do for now.

I do wonder what it’s like to be in a place where I can do that. What a simple prayer I can say. Just ask Him to teach me to give Him my whole heart. Or at least to start small; give him some, not taking any back, but continuing to allow myself to let the walls down and give Him what I can. Knowing He will prepare me to do so.

Are you in this place? Or something similar to it? I want to hear your story, advice, what you have learned, what questions you’re still asking. We’re all looking for something, we might as well learn and grow with each other in the process.

(God, I pray for whoever reads this that You use these words for their good and for their needs specifically. And that anything I might have said that does not align with Your Word and beliefs that You change it so that it does.)